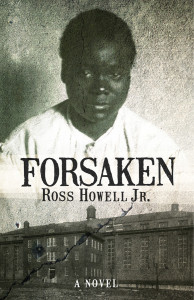 The April 1912 murder trial of Virginia Christian roiled racial tensions in Hampton, Virginia. An uneducated African-American girl just five feet tall, Christian was found guilty of killing her white, fifty-one-year-old employer, a widow. Christian was executed in the electric chair at the state penitentiary in Richmond one day after her seventeenth birthday. She is the only female juvenile executed in Virginia history.

Charles Mears, a white, eighteen-year-old reporter covering his first murder case, is the narrator of Forsaken. The devout, chain-smoking Mears tries not only to win clemency for the girl from William Hodges Mann, the last Confederate veteran to serve as governor of Virginia, but also to protect thirteen-year-old Harriet, one of the girls orphaned by the murder, who is being sexually abused by the wealthy uncle the court named as her guardian.

The lead attorney representing Christian is the extraordinary George Washington Fields, a former slave who escaped to freedom as a boy in 1863. Fields was the first black man to graduate from Cornell Law School, and rose to prominence as an attorney in Hampton, even after losing his eyesight two decades before the Christian trial.

After Christian’s conviction and the accidental death of his newspaper’s editor, Mears crosses the color line, convincing the editor of an African-American newspaper in Norfolk to hire him. In his weekly column Mears speaks out against Jim Crow, drawing the wrath of the Ku Klux Klan and a secret cadre of genteel white supremacists who would organize as the Anglo-Saxon Clubs of America. Kidnapped to the Virginia Colony for Epileptics and Feebleminded, Mears, aided by Harriet, barely escapes with his life.

Throughout the novel events like the sinking of the Titanic and the rise of the eugenics movement, along with unforgettable figures like Hampton coroner George Vanderslice and Walter Plecker, a physician who relentlessly pursued racial purity laws that came to be emulated in Nazi Germany, are brought to life. Tragic as the events that unfold in Forsaken may be, the story Charlie Mears tells is one of love, redemption, and hope.

“If you live for charged, exciting fiction, then Ross Howell Jr.’s new novel Forsaken is the perfect companion for these last few winter evenings. Released to rave reviews…it’s a solid entry into the Southern canon.” – Southern Living

“Forsaken is superior historical fiction detailing a cruel national past and a young man who follows his conscience.” – Foreword

“Howell paints a starkly realistic portrait of the racism that prevailed in Hampton Roads, Virginia, during the long, grim years that followed Reconstruction….an honest and riveting look at all the ugly aspects of racism at work in the U.S. in the beginning years of Jim Crow.” – Booklist, published by the American Library Association

“A story unearthed from old newspapers, a searching look at the facts, eloquent testimony and behind-the-scenes evidence: Forsaken is the fair trial Virginia Christian never had, in which the innocent are justly treated, the guilty finally charged. The last question we the jury are asked to consider, in light of today’s murderous headlines, is whether the old racial hatred and oppression have returned, hidden in the same shadows Mears noted over a hundred years ago.” – Atlanta Journal-Constitution

“With such characterizations, smooth prose whose strength rests in restraint rather than flourish and a gripping narrative that explores racial issues in societal and individual ways, Howell creates an immensely powerful novel that blends fact with fiction — and over which looms the malignant specter of Jim Crow.” – Richmond Times-Dispatch

“Howell knows how to hold readers’ attention, and Christian’s story is an important reminder of the horrors of Jim Crow.” – Kirkus Reviews

“The fiction of good storytellers can get at some of the barren heartache and injustice behind those old Jim Crow stories as well as the brand new Jim Crow stories of massacres and ‘legal homicides’ showing up in our newspapers at the beginning of another century, the twenty-first. Travel back a hundred years in Ross Howell Jr.’s literary page-turner, Forsaken, and see as if we are there—through a young reporter’s eyes—how we struggle as human beings to wean ourselves from bigotry.” – Clyde Edgerton, author of The Night Train

“In Forsaken, Ross Howell Jr. has vividly recreated a sensational crime firmly rooted in history. His depiction of both time and place—and the racial tensions of a torn society—are drawn with great expertise and insight.” – Jill McCorkle, author of Life After Life

“A haunting, riveting work of historical fiction concerning a sixteen-year-old black girl convicted in thirty minutes by a jury of twelve white men and sentenced to a brutal execution in the summer of 1912. Southern history—as palpable as the oak-handled electric chair that had to be modified to fit the small frame of Virginia Christian—casts a long shadow in Ross Howell Jr.’s fast-paced novel, raising very contemporary questions about the racial politics of justice.” – Minrose Gwin, author of The Queen of Palmyra

“Terse, forceful, stirring, Forsaken took me in its grip and shook me like a rag doll in the maw of a mastiff. Some of its themes are injustice, corruption, and racial conflict, but in its purest terms Ross Howell Jr.’s debut novel is about good and evil. Open Forsaken—and hold on tight.” – Fred Chappell, author of I Am One of You Forever

“Ross Howell Jr. writes with a precise knowledge of the facts and sympathy for the characters in their time and place. He has constructed an intricate, ambitious novel readers will admire for its subtlety and grace.” – Kent Nelson, author of The Spirit Bird

“Not since Atticus Finch have we met a character spun from the threads of integrity as beautifully as Charlie Mears in Ross Howell Jr.’s exquisite novel, Forsaken. Set in the early 1900s in Virginia, it’s the tale of an honorable young newspaper reporter who befriends an African American girl facing the electric chair for murder. A deep and powerful discourse on racism and redemption, Forsaken and the characters who live and breathe within its pages will not be soon forgotten.” – Jennie Fields, author of The Age of Desire

“Filled with the voices and lives of what Flannery O’Connor called ‘good country people,’ both black and white, Ross Howell Jr.’s Forsaken is swift and unexpected medicine, just the kind required to break the spell of an entire society built on crimes against humanity.” – Don Wallace, author of The French House

“Forsaken is a powerful and moving story that has the heart and wisdom of To Kill a Mockingbird, and displays a reverential embrace of history reminiscent of Faulkner’s best.” – Rashad Harrison, author of The Abduction of Smith and Smith

“In 1912, a sixteen-year-old African American girl, Virginia Christian, was convicted by a jury of her ‘peers,’ twelve white men, of murdering her employer, a white woman. The jury took only thirty minutes to decide her fate—death in the electric chair. Ross Howell Jr.’s historical novel Forsaken shows the breadth and depth of racial hatred that we continue to live with in the 21st century.” – Joyce Hansen, author of I Thought My Soul Would Rise and Fly