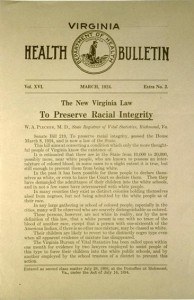 The work of Dr. Walter Plecker’s Bureau of Vital Statistics would culminate in Virginia’s 1924 Racial Integrity Act, which remained on the books until it was overturned by the U.S. Supreme Court in 1967. Plecker is depicted in the novel, Forsaken.

Born into a slave-owning family in the Shenandoah Valley of Virginia just days before the shelling of Fort Sumter in Charleston, S.C., Walter Ashby Plecker (1861-1947) received a medical degree from the University of Maryland in 1885.

The young physician did a lot of good.

“Plecker worked as a country doctor in western Virginia and the coalfields of Alabama before settling in Elizabeth City County, the area that is now Hampton, Virginia, in 1892,” writes Tori Talbot in Encyclopedia Virginia. “In 1902 he became the public health officer for Elizabeth City County. He took a special interest in delivering babies; educating midwives; developing a simple, use-at-home incubator; and working to reduce by half the…birth–mortality rates among the poor. Plecker distributed silver nitrate to be administered to the eyes of newborns, a procedure that helped reduce incidences of syphilitic blindness that were especially high among African Americans and Indians.”

His success at keeping birth records in Hampton led to his appointment as the first Registrar of Virginia’s new Bureau of Vital Statistics in 1912.

Plecker later associated with John Powell, a world-acclaimed pianist and composer, and Earnest Sevier Cox, a preacher and white supremacist author of the book, White America, to found the Anglo-Saxon Clubs of America, a group of wealthy, politically powerful men who sought to use eugenics and the legal system to resolve “the Negro problem.”

Tasked with registering every child born in Virginia with a birth certificate, Plecker developed a form specifying just two categories for race, “white” or “colored.” Any infant designated “white” must have “no trace whatever of any blood other than Caucasian.”

In 1924, after the passage of Virginia’s notorious Racial Integrity Act, Plecker wrote the most infamous letter in his official correspondence, addressed to a young white mother married to a man his bureau had somehow determined was a “negro.”

“This is to give you warning that this is a mulatto child and you cannot pass it off as white. A new law passed by the last legislature says that if a child has one drop of negro blood in it, it cannot be counted as white. You will have to do something about this matter and see that the child is not allowed to mix with white children, it cannot go to white schools and can never marry a white person in Virginia.