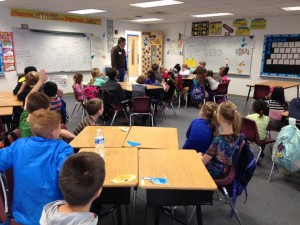 “I celebrate myself, and sing myself, / And what I assume you shall assume, / For every atom belonging to me, as good belongs to you”–Walt Whitman. (Top photo) Posing with a fellow author, one of Mrs. Whitlock’s second graders. Photos courtesy Tammy Blackwell.

Last week I had the chance to visit Colfax Elementary School in North Carolina to talk about writing with Mrs. Whitlock’s second graders and Mrs. Wilson’s fourth graders. We discussed what an author does, learned the word “empathy,” recited together a couple lines from Walt Whitman, and then in teams wrote stories and shared them aloud.

The kids’ enthusiasm was wonderful. Their imaginations unbridled. And they cared not a whit what an editor or publisher might think. For them, the world was magical. And so were words.

The Invisible Girl! by Rosie and Satina

Once upon a time in a faraway land there was a mad scientist. He wanted to do something excellent. He wanted to make somebody invisible. So he mixed a moth’s wing, boiled water, hand sanitizer, and conditioner. Then he tested it on the moth and then the moth turned invisible. Then he said, YES! YES! IT FINALLY WORKED! After it worked then the moth flew away. The moth got in a bottle. Also there was a girl named Lily. When she went to the bathroom, she drank the moth, then she turned invisible. And she never knew until she woke up she had a sister. Then she was invisible forever! The end.

The Big Adventure by Emma, Makiya, and Alexandra

There were many other notable stories, like a comedy about Sir Derpalot riding through an enchanted forest to save Princess Nutella from her Jello tower, and a zombie apocalypse where the zombies ate all the people and started eating each other until only one zombie was left. That zombie pooped a rainbow.

(Two more stories are below. Click on the image to enlarge.) 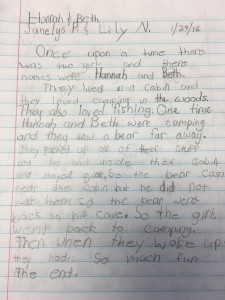 Story by Izzy and Marley.