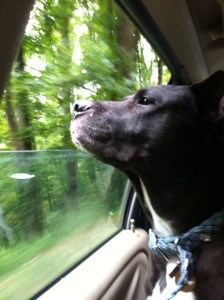 Sam, our pit bull-Lab mix, enjoying one of his favorite pastimes, “riding dirty.” In the large picture, he’s posing with statues of Babe and Yogi, bat dogs for the Greensboro Grasshoppers minor league baseball team.

When a neighbor coaxed him off the streets of Fisher Park, where we live in downtown Greensboro, Sam weighed 43 pounds. His kidneys were shutting down. He had scars on his legs, shoulders, neck, and muzzle. He had tested heartworm positive. He had internal parasites.

The man who took Sam in lives in a small apartment. Finally, he said he couldn’t accommodate him any longer.

Another neighbor asked my wife and me if we would keep Sam for two weeks. We said yes, reluctantly. With our small female cocker Pinot in the house, age nine and going deaf, we worried about her safety.

That was four years ago.

Sam tolerated Pinot’s diva-ness. When she drove her nose into his food bowl, he lifted his head to let her take what she wanted. When she chose to lounge in his bed, he curled up on her small bed nearby to wait her out. When not deferring to Her Royal Highness, he was nanny to four other foster dogs passing through the house.

My wife and I visit the Gulf Coast, and we walk Sam on the sugar beach by turquoise water. People will stop us to ask if they can pet him.

They’ll comment how handsome he is, how calm, and pat his broad shoulders. When he first came into our household, people would step off the sidewalk at some distance to avoid passing him.

Walking, Sam lifts his muzzle to the wind. From time to time, he sniffs the sand and stops to dig. He might uncover a fisherman’s bait or part of a gull’s wing. He promptly pees on the find before moving on. He studies the plovers scurrying before us at water’s edge.

Sam and I are far enough along in years that we take note.

I like to walk with him, just the two of us, at sunrise. Sand and water and sky glisten in lavender and blue and gold, and the clouds look like what clouds must think they look like when they’re dreaming.

I think it’s as hard for me to tell Sam what I feel about him as it is for Sam to tell me.

So I made him the character Lucky in my novel.