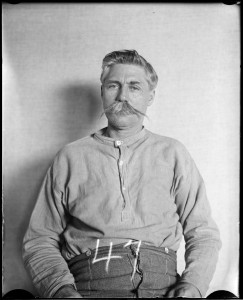 Mug shot of Floyd Allen taken at the state penitentiary in Richmond, Virginia, where he would die in the electric chair. Library of Virginia.

Found guilty of first-degree murder in the courtroom shooting in Hillsville, Virginia, Floyd Allen was sentenced to death by electrocution in May 1912.

Virginia Christian’s murder trial took place a month earlier. Her lead attorney, George Washington Fields, a former slave, was blind. Despite the disability, he was masterful at interrogating witnesses. J. Clay Smith, Jr., in Emancipation: The Making of the Black Lawyer, 1844-1944, notes that Fields, defending a black mail carrier accused of shooting his son, placed his client on the stand. After his client’s testimony, the charge was reduced to carrying a concealed weapon.

Fields felt Virgie should testify in her own defense. He thought the girl’s account might help her avoid the death penalty, since it would show her victim’s death was the result of a heated, spontaneous argument, with no premeditation. Virgie was anxious to tell her side of the story.

Yet Fields deferred to the judgment of his co-counsel, Thomas Newsome, who was against it. In the appeal filed with the superior court, Fields wrote, “Petitioner’s counsel in the best of faith impressed upon her the serious consequences that might result from a detailed account of the mutual combat which your Petitioner would swear took place between her and the deceased, and fearing that it might not only result in inflaming the mind of the jury against your Petitioner, but that some word might have fallen from your Petitioner’s lips, an ignorant, blunt, negro girl that might have precipitated a crisis somewhat akin to the Hillsville outrage which had occurred just a few weeks previously.”

“A crisis somewhat akin.” Fields was mindful of the Hillsville courtroom, far from Hampton.

Would Virgie’s testimony have spared her life? Well, a verdict of second-degree murder was an option in the judge’s instructions to the jury. Manslaughter was another.

A jury of white men didn’t see it that way. In their eyes justice for the black girl was death. And had Virgie’s life been spared in the court, it almost surely would have been snatched from her by a mob in the streets.

So Floyd Allen and “the Hillsville outrage,” in George Fields’ words, led me to the story of Virginia Christian.