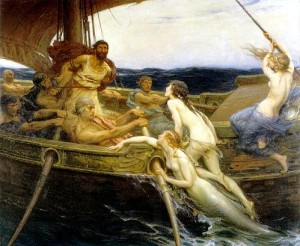 Odysseus and the Sirens by Herbert James Draper, c. 1909.

A goal I set for the novel Forsaken was to have it be as accurate historically as I could make it. This became an obsession.

I’d caution anyone interested in writing historical fiction against the sirens’ song of research. There’s so much information!

As writers, we want to listen to what history has to say. But if we listen too long, our little vessels may wind up on the rocks.

Yeah, I looked all that up. So does the narrator, Charlie Mears, reporter for the Hampton Times-Herald, at the morgue of his paper’s competitor, where he finds the obituary of Mrs. Belote’s husband, who died the year before his wife was murdered.

In an engineering magazine, I found an advertisement for his company, the Hobbs-Newby Equipment Co., Inc. I found a catalog with pictures and drawings showing the massive hoist equipment his business sold to the Newport News shipyards. I found a picture of the Seaboard Bank Building where his business was located. I researched if the five-story structure would have an elevator. It did.

I thought I would try to search out the floor where Hobbs’ offices were actually situated.

Then it occurred to me. The clock is ticking. You’re not a young man. Just make up a floor, or you’ll never get this novel written.

While it’s fascinating, wondrous, and seductive, research is time-consuming. But it can lead to the hidden truth of history, truth that can lend wisdom to the way we live today.