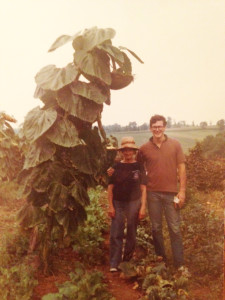 Rachel Catherine Howell (1915-2009) with a sunflower and me in her garden near Willis, Floyd County, Virginia.

Words did not come easily to my mother. Yet there we stand, embowered by her eloquence.While Mom was diffident in the way of country people, you can see from the picture she could make anything grow. In an academic career spanning one undergraduate and two graduate schools, I could bring home nearly any straggly, brown, nearly lifeless houseplant, and under her care, in sixty days it would be thriving.

But that’s only part of it. A big part, of course, that ability to communicate with something that cannot speak, that cannot move, that is dependent upon you for its nurture, able to demonstrate its needs only by the act of living or dying.

I remember times driving home from school to the farm of a February, snow piling up as I ascended the Blue Ridge plateau, to find a calf wrapped in blankets on our closed-in back porch. Sometimes if the night were exceptionally cold and the calf noticeably weak, I’d discover it nestled on a pallet in front of the wood-burning cook stove in the kitchen.

Usually Mom was in another room, asleep in front of the TV, waiting for me to arrive.

How did she silently convince that mother cow, after she had licked her calf clean and nudged it to stand and suckle at her teats, how did she convince the cow to let her push part way, carry part way, that precious offspring from stable to house without her bawling and storming after? How did she convince the calf to lie quiet far from its mother’s protection, and not soil the back porch or her kitchen floor during the night, since such an accident so rarely happened?

In a workshop I remember author Mary Lee Settle saying, “When you write something, up till then, a silence existed between you and the reader, and you’re responsible for breaking that silence.”

I figured Mary Lee was encouraging us to consider others and not just ourselves when we wrote, telling us that not only what we said but how we said it was important. But maybe the silence she was talking about was bigger. Maybe it was my mother’s silence, where there are no words, and the right ones can speak life itself.