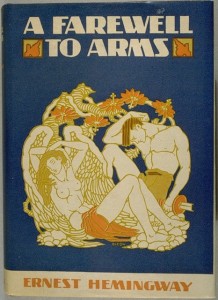 The first edition of Hemingway’s second novel, A Farewell to Arms, featuring a cover illustration by Cleonike Damianakes, was published in 1929 by Charles Scribner’s Sons with editor Maxwell Perkins.

Yesterday I was speaking by phone with my publisher, Suzanne La Rosa of NewSouth Books, about the book trailer storyboard I’d sent her.

Since my novel Forsaken is set in 1912, photographs are available of real people and places that appear in my fictional account of the trial and execution of the African American girl, Virginia Christian. So I thought about what I admire in Ken Burns’ work and did my best to cobble together pictures with words and music, and sent the result off to Suzanne.

I don’t think Suzanne realized how much I appreciated what she said.

As an author, I want to disappear behind my words. And while I think of myself as a Southern writer, it’s authors of the late nineteenth and early twentieth centuries, the historical period that holds such fascination for me, who continue to inspire me.

So here at the blog I thought from time to time I’d share passages I’ve admired since I was young.

I begin with the opening paragraph of Hemingway’s second novel, A Farewell to Arms. The book is based on his experiences in World War I.

“In the late summer of that year we lived in a house in a village that looked across the river and the plain to the mountains. In the bed of the river there were pebbles and boulders, dry and white in the sun, and the water was clear and swiftly moving and blue in the channels. Troops went by the house and down the road and the dust they raised powdered the leaves of the trees. The trunks of the trees too were dusty and the leaves fell early that year and we saw the troops marching along the road and the dust rising and leaves, stirred by the breeze, falling and the soldiers marching and afterward the road bare and white except for the leaves.”

Stunning clarity. Evanescent. Words of one or two syllables. Only one of three. William Faulkner joked of Hemingway, “He has never been known to use a word that might send a reader to the dictionary.”

Seems simple. And yet it isn’t.