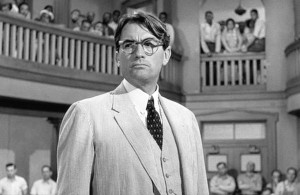 With the controversial release of Harper Lee’s Go Set a Watchman and its dark depiction of To Kill a Mockingbird’s Atticus Finch, I asked some of my writer friends to respond to this question:

Why are fictional characters so important to us, since they aren’t even real?

Journalist, editor, and novelist Don Wallace is author of the memoir, The French House: An American Family, a Ruined Maison, and the Village That Restored Them All.

“My father was Atticus Finch in our civil rights movement in Long Beach, California,” Don writes. “And yet… He belonged to an exclusionary country club, lived in a neighborhood that had one new African-American neighbor (whose home was promptly vandalized and whose lawn got a burning gasoline cross on it), and at times would agree with William F. Buckley on the latter’s patrician television diatribes against the lower orders.

“So in this current controversy I don’t see a fictional character, just one who reflected our need for a perfect paragon—a role also forced on Sidney Poitier, Harry Belafonte and Bill Cosby—of a group of people we of the majority white population desperately wanted to help.

“I haven’t read the new Lee book, but the feet of clay I have read about seem more suited for a realistic fictional character from that time and place. The arc of biography bends slowly but surely towards truth.”

Marianne Gingher is a novelist, short story writer, memoirist, and essayist. Most recently she was editor of a New York Times best-selling anthology, Amazing Place: What North Carolina Means to Writers.

“But they ARE real,” says Marianne. “Who said they aren’t? They are real in everlasting, enduring, universal, and complicated ways like Dorothy of Oz and Saint Nick and Phoenix Jackson and Joe Christmas and Nick Adams and Scout. We learn things about all of these folks that shape us, mystify us, show us what is worth celebrating about humanity: persistence, grace, courage despite prevailing ignorance, kindness, grit, generosity, patience, selflessness, loyalty, love. I tend to throw books aside that don’t offer me at least one character that speaks to these virtues. I stopped watching the popular (but ultimately empty) ‘Orange Is the New Black’ because I couldn’t find a single character I believed in; and I couldn’t believe in them because they offered me so little of the virtues that really and truly help to get us all through the barbed wire of daily life.”

Ellen Urbani is author of the memoir, When I Was Elena, and the forthcoming novel Landfall, set during hurricane Katrina. Her response is short and right on the money.

“Because in our imaginings we can live out the best versions of ourselves,” Ellen writes, “and in others’ imaginings we see the people we want to be.”

Please post your comments. Are fictional characters important? Which are your favorites?