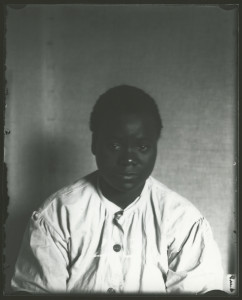 (Large photo) Courthouse in Hillsville, Virginia, where five people died in a March 1912 shooting in the Blue Ridge Mountains. (Small photo) Virginia Christian, who was charged in March 1912 with murder in Hampton, Virginia, and was not allowed to testify in her own defense.

Recently a reader from Brooklyn, New York, sent me a letter asking important questions about motivation in the novel Forsaken. “The matters worried me and I’d love to know the answers,” she wrote. I’ll answer her first query here, and her second next week.

“Why did the defense attorney not put his client on the stand to offer the exculpatory defense of fear for her life or safety, when the employer picked up a stick first? Did he fear cross examination or her appearance or lack of remorse?”

And in fact, Fields felt Virgie should testify in her own defense. He thought the girl’s account might help her avoid the death penalty, since it would show her victim’s death was the result of a heated argument, and not premeditated, just as you suggest in your question.

Yet Fields deferred to the judgment of his co-counsel, Thomas Newsome, who was against Virgie testifying.

In the appeal filed with the superior court, Fields wrote, “Petitioner’s counsel in the best of faith impressed upon her the serious consequences that might result from a detailed account of the mutual combat which your Petitioner would swear took place between her and the deceased, and fearing that it might not only result in inflaming the mind of the jury against your Petitioner, but that some word might have fallen from your Petitioner’s lips, an ignorant, blunt, negro girl that might have precipitated a crisis somewhat akin to the Hillsville outrage which had occurred just a few weeks previously.”

The “Hillsville outrage” happened in the mountains of Virginia, near where I grew up. Just days before Virgie was charged with murder, gunshots rang out in a courtroom there. Five people were killed in a matter of moments, including the sitting judge, the Commonwealth’s attorney trying the case, and the sheriff.

While the incident happened far away, its repercussions echoed all the way to Hampton, influencing Fields’ decision.

Maybe even more significantly, though, some Hampton newspaper accounts described the girl as “a Negress,” “dim-witted,” and “sullen.” Racial tensions were growing.

A black girl had taken the life of a white woman, one of the most reprehensible crimes imaginable in Jim Crow Virginia. No doubt George Fields was mindful of that reality, too.