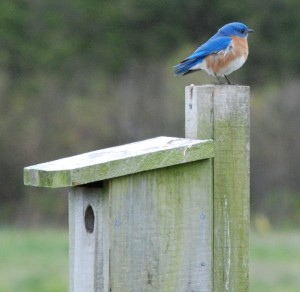 The male eastern bluebird claiming our backyard box “carries the sky on his back,” as Henry David Thoreau wrote. I’ve watched him the past couple weeks.

At first there were quiet differences of opinion as to who had rights to the box. Some mornings I’d see two males sitting atop it, with another perched in the bare limbs of the fig bush nearby, watching the others. One would drop down to the entrance hole, checking the accommodations, sometimes entering for a moment. A second male would perch at the hole, peering inside to see what the occupant was doing. Then they’d both flutter off, shadowing each other in a tree or shrub, solemn sentries.

When a female stopped by, the ministrations of the males grew more intense, though even in their differences, every aspect of the bluebird seems to be gentle. In voice, action, color—bluebirds are the white-gloved gentlemen of the bird world.

Territorial disputes between robins for a section of turf can be furious and swift, and such disturbances set the bluebirds ill at ease. They’ll fly to the high limbs of my neighbor’s black walnut, until the ruckus quiets down.

But now a single male seems to have settled the matter of ownership of the box. And for the past few days, he’s been successful at enticing a female.

He’s so handsome, so stalwart, how could she not find him attractive? She sits in the fig, eying him. He sits erect, at the very pinnacle of the metal pole supporting the box, the lord of all he surveys.

She flies over to sit on the rooftop, just beneath him. But she won’t drop down to peer in the hole, much less go inside the box.

She seems very particular, as my country ancestors would say.

Watching, I feel guilty. I cleaned the box and let it air out, but I didn’t repaint it last fall, as I had planned. It looks a bit shabby. Have I made his task more difficult?

She flutters away, and I see him studying her flight. But he holds his ground. In fact, he turns in the sunlight, so the blue of his back shines even more gloriously.

He sits atop the pole, like a novelist having a bad day at the keyboard, confident the next chapter will come.