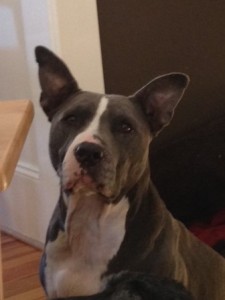 Elly Mae became a Howell family member on February 17, 2016, when my wife Mary Leigh signed her adoption papers from the Merit Pit Bull Foundation. We’d been fostering her for a little over a year.

She’s a pretty girl, with her blue coat and white markings. People often admired her at the adoption events where we took her.

Elly had been rescued as a stray and kept at a shelter for 120 days. Though she was a favorite of the staff, no one offered to adopt her. Time was running out.

She has a thick scar the shape of a lightning bolt on her haunch. People speculate she might have been hit by a car. Others say the scar looks like a bite wound a dog would incur trying to escape a fight.

When we took Elly in, I couldn’t walk her downtown because she would cower on the sidewalk at every passing car. If a city bus growled by, the sound threw her into a paroxysm of fear. For weeks we confined our walks to our neighborhood and its adjacent park.

Fortunately, we have another rescued pit bull, Sam. Sam may be a reincarnation of Buddha. He has been nanny to a handful of dogs over the years, from dachshunds to springer spaniels, from puppies to seniors.

Elly noted Sam’s insouciance at passing vehicles, and little by little, her anxiety around traffic waned. In time, we were able to walk Greensboro’s busiest downtown streets.

Still, there are moments when we see anxiety wash over her. It can be triggered by a loud sound. Sometimes, it seems to be nothing at all. She’ll trot off to hide behind a rocking chair in our office, or jump on the bed in our downstairs bedroom, flicking her ears warily while some trauma revisits her.

We let her stay where she cloisters herself. After a while her anxiety passes, and she emerges, of her own will.

She’s a playful clown when confident, friendly with strange dogs and children, but in her behavior tests to determine her ability to adapt to a new home, she would shut down, ignoring attempts to get her to interact.

So now Elly Mae is ours.

Sometimes she looks at me the way I remember teenage girls looking at Elvis, and I wonder if this fate was by her design.