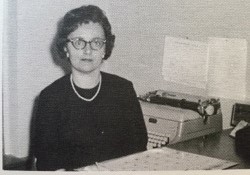 Mrs. Vergie Weeks, Michael’s mother, at her desk in the office of the superintendent of schools, Floyd County, Virginia, 1965.

In May 1955, the U.S. Supreme Court handed down its decision in Brown v. Board of Education II, stating that “all deliberate speed” was to guide the desegregation of schools. That fall I started first grade in Floyd, Virginia, riding bus #27 the seven miles from home to my elementary school. In Floyd there was also a school for “colored” children—Harris Hart Elementary.

Riding the bus, I noticed each morning near the Dodd’s Creek Bridge that we passed a yellow carryall bus, headed in the opposite direction from the schools in Floyd.

When I asked about it, I was told this bus carried “colored” high school students to Christiansburg Institute, about 25 miles north of Floyd. I didn’t think much about this, until I saw on television news in 1959 the turmoil in Prince Edward County, where all the public schools were closed in order to avoid integration.

My mother was employed as the secretary to the superintendent of schools in Floyd. She commented one evening while watching the news that Floyd schools might also have to be closed, as there was opposition to integration. This “inside” knowledge was unsettling—why would schools be closed to keep certain students from attending?

Fortunately, cooler heads prevailed in Floyd County and in January 1960, two of the then three high schools admitted black students. I no longer saw that yellow carryall bus in the morning on my way to school.

At the end of the school year, Floyd High School graduated the first black student from an integrated high school in southwest Virginia.

When I started at the new, consolidated Floyd County High School in 1962, my bus picked up black students, one of whom would become the varsity football coach at FCHS for more than 30 years. All classes were integrated, although it was strange the first year that all the black students’ lockers were in a single row outside the library. But that practice soon ended.

The yellow carryall bus that had piqued my curiosity when I was in elementary school ended up being the sports activity bus I rode my senior year, and the principal of the old Harris Hart Elementary had joined the FCHS faculty. When I graduated in 1967, nine of the 143 students in my class were black.

I’m not suggesting that Floyd County’s handling of integration was without difficulty, but the book Something Must Be Done About Prince Edward County by Kristen Green details vividly the devastating effects of a county’s insistence on maintaining segregationist policies.

No one should have to ride a school bus headed in the wrong direction.