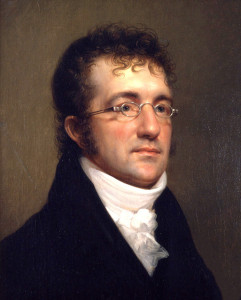 Portrait of Benjamin Henry Latrobe by Filippo Costaggini, painted in 1881.

Benjamin Henry Latrobe (1764-1820) is best known for the U.S. Capitol in Washington, D.C. But he designed a notorious building earlier in his career—the state penitentiary in Richmond, Virginia, where Virginia Christian died in the electric chair in 1912.

Emigrating from London to the United States in 1796, Latrobe landed in Norfolk, Virginia, after a difficult four-month sea passage with food stores so short some passengers nearly starved. Latrobe was in difficulty. After his wife Lydia died giving birth to the couple’s third child, he suffered a breakdown. And though his wife’s fortune was to be managed by her two uncles to benefit their children, somehow the money never reached them.

In America Latrobe was among the first formally trained professional architects. He became friends with Bushrod Washington, nephew of President George Washington, and visited Mount Vernon. He also met Edmund Randolph, former governor of Virginia, and the first Attorney General of the United States.

Now acquainted with men of power, Latrobe moved from Norfolk to Richmond. There Thomas Jefferson had long argued before the general assembly for the construction of a central “penitentiary house,” like those seen in Europe, designed to “confine and reform” criminals. Corporal and capital justice in Virginia was meted out at county seats, with criminals incarcerated in small local jails. After ignoring Jefferson for a decade, the legislature finally approved construction of the project.

Latrobe was named architect. The new penitentiary was to incorporate innovative penal reform ideas advocated by Jefferson and others, including cells arranged in a semicircle to facilitate surveillance of prisoners, as well as salutary living conditions with effective sanitation and ventilation.

Built just outside Richmond overlooking the James River, the penitentiary received its first inmates in 1800, although construction was not completed until 1804. By then, Latrobe had already begun work on the Capitol.

Latrobe’s penitentiary design was impressive, but functionally flawed. Cells were large, holding several prisoners, yet the doors had no windows, making it impossible to keep inmates in view. Moreover, cells had no heat, poor ventilation, and no plumbing.

Latrobe’s original structure was torn down in 1928, sixteen years after Virgie Christian was executed within its walls. Three cupolas from the building were preserved and can be viewed on a Richmond walking tour. They are all that remain of Latrobe’s design.