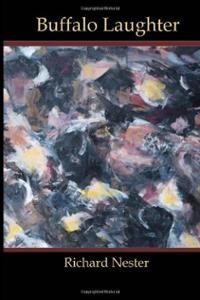 Buffalo Laughter is a collection of poems by my FCHS and UVA schoolmate, Richard Nester. In the large picture a ground crew services a B-17 Flying Fortress during WWII.

In Floyd County, Virginia, where Richard and I grew up, there’s a hump-shaped peak known as Buffalo Mountain. Floyd County High School (FCHS), where we met, is home to the Fighting Buffaloes.

A year ahead of me, Richard went from Buffalo to Cavalier, attending the University of Virginia. I remember working with him on a film project there when I matriculated, and then we lost touch.

We became separated by a continent, and life. Richard moved west, teaching at the University of California, Irvine, for more than thirty years. He married a poet and raised a son.

On Facebook, I found him. Found his book. Found him wrestling in verse with the past.

The title poem depicts a school reunion, buffaloes chatting about buffalo things, grazing the buffet, and in the end, breaking up the furniture.

While “Buffalo Laughter” made me chuckle, the poems “Anger” and “Between Me and You” sobered me, reminding me how Richard and I had been shaped by war.

While we came of age during Vietnam, the conflict that shaped us was World War II.

Richard’s father went island-hopping in the Pacific, while my uncle serviced B-17 Flying Fortresses bombing Nazi Germany. From opposite ends of the world they brought home rage to their supper tables. The scene Richard draws in “Anger” I seemed to live every evening of my youth. Somehow, I wish I’d known about his experience when we were teens. I wouldn’t have felt so lonely.

My favorite poem in the collection is “Once Upon a Time.”

Some people have asked me how

and why I became a poet. It’s simple really.

At my school we danced on Fridays

the boys with the girls

and every other year the girls were pretty,

and I belonged to a favored class.

Right off I felt the old longing, the desire to be attractive, the great distance between being a boy and being a man. Richard laments the early death of a dancer, someone I too knew. Though he’s describing his relationship with her, I feel in his writing he knows just who I was, just who I am.