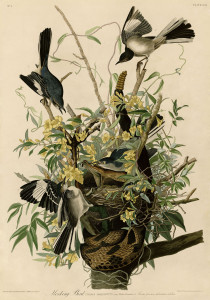 Though my home’s in Greensboro, N.C., for a couple of years I’ve been working on a landscape project on the Florida Panhandle between Panama City and Destin, by the white beaches and turquoise waters of the Gulf of Mexico.

My wife Mary Leigh and I are upgrading a home we call our “grown-up house,” because it has a foyer—a first for us. Our plan is to rent the house to vacationers in the high season, then spend some of the off-season there ourselves.

Mary Leigh has given me free rein on the landscaping, I expect because she feels the mischief I can create outdoors will be less pernicious than the mischief I might create inside. (Though one day she scurried outside after my new neighbor buddy and I had just felled a pine leaning ominously over his two-car garage. Her sigh of relief was audible when she saw that neither of us was injured and the garage stood intact. But I digress.)

Until recently our visits have been short, so my work was limited to spreading pine straw, grubbing out tree-choking vines, pruning limbs, and cleaning dead fronds from a sea of palmettos. (On my first bloody foray I learned they don’t call them “saw” palmettos for nothing—the teeth on those fronds are as effective as the blades on good set of steak knives. Sorry, I’m digressing again.)

It occurred to me as I was crawling about on my hands and knees—especially with the warmer weather—that it might be prudent to learn something about other Florida natives I was sharing space with.

In the Panhandle there are six species of venomous snakes.

First is the cottonmouth moccasin, an aquatic snake. Not good. Did I mention there’s a creek at the back of our lot and much of the area nearby is designated “wetlands”? Florida cottonmouths are about three feet long, dark in color, or completely black. When agitated, they hiss, revealing the white maw that gives them their name. Young moccasins may be reddish in color and easily confused with copperheads.

Copperheads also like streams and wetlands. They’re around the same length as cottonmouths, with a relatively thick body. Their color is gray to brown, with dark brown bands in a distinctive hourglass shape across their backs. Their camouflage is remarkably successful in the habitat they prefer—namely, our back yard. I’m going to have to keep a keen eye out for these guys!

Next on the venomous list is easier to spot because of its coloration. The skin on coral snakes has bright black, red, and yellow bands. The snakes are small—rarely more than 30 inches in length—and they’re reclusive, spending much of their time underground. Some non-venomous Florida snakes have similar coloration, but if red and yellow are juxtaposed, watch out!

Now for the rattlesnakes. The Eastern diamondback is described as the most venomous and dangerous of the snakes in Florida, growing to more than six feet in length. While they prefer dry habitats, like pineland or scrub, I certainly can’t rule out their presence in the yard. At least their rattles make a loud buzzing sound when they’re threatened, and they issue this warning before they strike. Usually.

Timber rattlesnakes prefer pinelands, river bottoms, and low-lying hammocks. That’s a good description for what our neighborhood must have been like before it was a neighborhood. Timber rattlers are pinkish-gray to tan in color, with dark markings, and a distinctive reddish-brown stripe running down the spine. Five feet long, they have large rattles and big heads. Fine. All the better to bite me with.

Last is the pygmy rattler. Adaptable little fellows, they’re “one of the most commonly encountered venomous snakes…in residential neighborhoods,” notes the University of Florida Extension Service. Fortunately, they’re not likely to carry enough venom to kill me. Problem is, shaking their little rattles with all their might, they probably can’t make enough noise to warn me off—my hearing’s not good.

I thought writing this would be therapeutic. It’s good to know your adversary, right? But in fact my anxiety has grown.

And there’s the matter of the native plants. This spring, a lovely carpet of native ferns emerged on our property. Wherever I find them, I encourage them with a dose of composted cow manure and topsoil, then carefully mulch with pine straw.

Just last week on the Internet I was able to identify them. They’re Botrychium virginianum, a hardy native species found all the way from Florida’s southern tip to Canada’s northern reaches. But the common name is a problem.