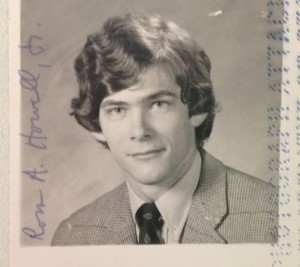 Passport photo in 1972, just before my backpack excursion to Great Britain and Europe. Chris Kerr served as best man in my wedding five years ago.

Thursday morning, I’ll embark from the Raleigh, North Carolina, airport on a flight to New York City’s LaGuardia. There, Chris Kerr, my friend of 45 years, will meet me.

I feel the same anticipation about this trip that I felt in 1972, flying into London’s Heathrow, on my first trip to England and the continent.

I met Chris in John Coleman’s writing class at the University of Virginia. I still remember his story, “Short,” about an army guy on the countdown days of his tour of duty.

Chris was on his second venture in academe. After his first, the deans suggested he might be happier and more productive in another environment.

The U.S. Army was happy to accommodate him, now that his student deferment was lost. After training at Ft. Benning, Georgia, he spent most of his service in Korea.

So there we were, the army vet who’d traveled the world in a military family, and me, the naïve kid from a farm in the mountains of Virginia.

But we hit it off.

Chris started out in the book trade after graduation, and he’s stayed with it ever since. If there is a more passionate advocate of the written word, I don’t know who it is. I, on the other hand, set out to be a writer, got involved in academic administration, then marketing, then publishing, and now, back to writing.

I think that’s why I feel such anticipation about this trip. Chris and I will be back where we started. Older and grumpier, of course.

Chris is the seasoned veteran. No one knows the vagaries of the book trade better. And I am the callow novelist, who, at age 65, has the (supply your noun of choice here) to introduce a book, and in his heart of hearts, to believe he might even launch a career as a fiction writer.

So I’m off to meet and greet, hoping to convince store owners, trade publications, and book critics in the Mid-Atlantic and New England regions that I’ve written something of merit.

With Chris as my chauffeur, I couldn’t be in better hands.