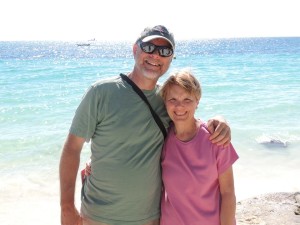 Michael Weeks, my guest writer this week, with his wife Janet. Michael attended Floyd County High School, graduating in 1967. I remember him playing a lusty trombone and terrorizing quarterbacks as a defensive end. He studied history and political science at King University in Bristol, Tennessee.

For nearly 40 years I worked as a juvenile probation officer and supervisor for the Commonwealth of Virginia. The transfer of juvenile offenders for trial in an adult court is a decision made in the state courts, and statutes vary widely state to state.

In Virginia, an offender must be at least 14 years old at the commission of an offense to be eligible for transfer to adult court. I can say in all honesty that the judges I worked with were very conscientious in making these decisions.

My job was to provide the court the necessary background information to render decisions, along with my recommendation to the court. During my career I looked into a number of these cases, taking into account the seriousness of the offense, the age of the offender, and the psychological and social factors influencing behavior.

These cases were clearly some of the most intense work I faced.

The youngest offender I remember was an eight-year-old boy charged with the murder of a family member. Probably he had a hand in the crime, but investigators were primarily interested in leaning on him to get incriminating testimony against another family member, who was thought to have orchestrated the murder.

The age of eight is just past the Common Law standard of age seven, when a juvenile is deemed capable of forming criminal intent, although that benchmark is open to interpretation. The defense attorney filed a motion alleging that the boy was not competent to stand trial. To be competent, a defendant must understand the charges against him and be able to participate in his own defense.

After a psychiatric examination, he was found to be not competent. In the case of an adult, or an older juvenile, this can be addressed by therapy to restore an individual to competence, whereupon he can be tried.

Problem was, the boy was declared incompetent because of his age, which is not restorable. This didn’t stop the Commonwealth’s Attorney from trying to have him declared competent, so he might testify, but the argument never stood a chance.

Meanwhile, my department was giving me hell, because the kid was being held at an age below Commonwealth standards, never mind that the presiding judge had ordered his detention.

Politics and flashy new programs set juvenile justice policy, but it is the struggle of experienced people applying common sense to their work that produces results.

Posted in Blog and tagged commonwealth of virginia, juvenile justice.