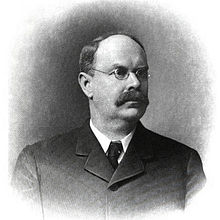 Paul Brandon Barringer is considered to be the founder of the modern University of Virginia hospital. Its first building, pictured above, opened in 1901 on April 13, in honor of Thomas Jefferson’s birthday.

When I arrived at the University of Virginia in 1968, I sometimes whispered to myself the names I saw memorialized on facades and statues. Surely those were great men, I thought.

Soon I had a part-time job in a lab located in the Barringer wing of the University hospital. I gave little heed to the name, except to commit it to memory.

It wasn’t until years later, when I began research for the novel Forsaken, that I encountered Paul Brandon Barringer in full.

A native of North Carolina, Barringer received a medical degree from Virginia in 1877 and a second degree at the University of the City of New York, where he interned at Bellevue Hospital.

Studying at clinics in London, Edinburgh, Dublin, Paris, and Vienna, he returned to Charlottesville as professor of physiology and surgery.

A strong advocate for laboratory research and the use of a microscope by every medical student, he saw the time of required study to receive a medical degree increased from one year to four.

He’s credited as the founder of the modern University of Virginia hospital, which opened its doors in 1901 on April 13, in honor of Mr. Jefferson’s birthday.

But Barringer was also a man of his times. His father had commanded Confederate cavalry, and an aunt was the widow of General Stonewall Jackson.

At a meeting of the Tri-State Medical Association of the Carolinas held in Charleston, S.C., in 1900, when he was chairman of the University of Virginia faculty, Barringer delivered a paper entitled, “The American Negro: His Past and Future.” His speech would later be printed and distributed to all medical societies in the South.

Barringer addressed what was called “the negro problem.”

“We all know that we had a good negro in this country once,” Barringer wrote, “and that was in slave times.”

Barringer argued that history demonstrated the inherent savagery of African Americans, that the contemporary tide of violent, criminal behavior could only be stemmed by white control of the ballot box, the classroom, and the jail key; otherwise, the South would be damned to miscegenation and ignorance.

My research would show there were other such voices at the University, men whose names were also inscribed on buildings and plaques.

For a day or so I grieved for my alma mater, and for the callow young man I once had been.