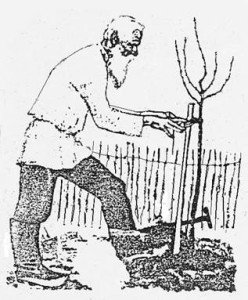 A society grows great when old men plant trees whose shade they know they shall never sit in. –Greek Proverb

Even the name is beautiful, isn’t it? Never mind the fragrant blossoms with petals like white satin, or the shimmering green leaves, rusty on the underside.

My wife Mary Leigh frets about the litter of big leaves and fruit, but I say no one complains about picking up after a successful party.

Oh, she’s the belle of the ball, the Southern magnolia, and soon I’ll be planting my first.

I made a place for her, cutting down a clumsily-pruned cedar and a tall pine looming ominously over the porch of the house.

She’ll stand, balancing her sister at the far end of the front yard, proudly contrasting her deep green with the white bark of the river birches between them. I grubbed palmettos away from the skirts of her sister, a tree a good forty feet tall.

Her height suggests the mathematical problems, however.

The first is budgetary. We don’t have the money or inclination to hire a landscaper to bring in a crane to install a mature tree. So we’ll have to begin with a young one. Let’s say my tree will be five to six feet tall. A good start.

The second mathematical problem is more significant. Magnolia floribunda grows slowly, at the rate of one to two feet a year—more rapidly when young, the botanical entry adds, in an encouraging way.

At this writing, I’m sixty-five years old. As of 2010, the average lifespan for the American male homo sapiens was seventy-six.

You see the problem. My Southern belle is not going to grace me with a lot of shade, if she’s average, and I’m average.

So when I came across the Greek proverb I used in my caption, I felt vindicated. I felt selfless and noble. In the wisdom of age, I would enrich in a modest way the lives of generations to come.

Truth is, of course, I’ll plant the tree because I like digging in the earth. I like touching a living thing. I’ll like listening to the bugs and birds and frogs make music in its branches. I’ll like watching the motion of its leaves as they nod in the wind.

And I’ll enjoy its shade, narrow though it may be.

Hmm. I wonder if the Greeks had anything ennobling to say about old men who write novels.