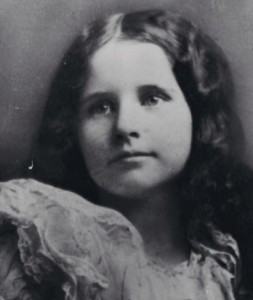 Virginia O’Hanlon was eight years old when she penned her famous letter to The New York Sun newspaper in 1897.

“Is there a Santa Claus?” asked little Virginia O’Hanlon in a letter to the editor of the New York Sun newspaper in 1897.

“Yes, VIRGINIA, there is a Santa Claus,” Church said. “He exists as certainly as love and generosity and devotion exist, and you know that they abound and give to your life its highest beauty and joy.”

While Virginia Hanlon wasn’t child of privilege—her father was an assistant coroner—she was white.

Another Virginia, the black Virginia Christian of Forsaken, lived in a world separate from Virginia O’Hanlon’s. And the divide was growing.

Virginia Christian was the daughter of former slaves. Her parents were among a tide of African Americans who had poured into Hampton, Virginia, during and after the Civil War. Illiterate by law, often penniless, they sought new lives as free men and women. They sought education and opportunity for their children.

Virginia Christian would find little beauty and joy in her life, and precious little love or generosity. Two years old when Virginia O’Hanlon penned her famous letter, Virginia Christian grew up in a society grappling with the issue of race in the aftermath of war and Reconstruction, a time fraught with anger and resentment. Like her black neighbors, many of her white neighbors knew something about hunger and privation.

In 1912, fifteen years after the New York Sun affirmed there indeed was a Santa Claus, Virginia O’Hanlon received a Master’s degree from Columbia University and accepted her first teaching post. She later received a Ph.D. at Fordham University and became a school principal, remaining in education until she retired in 1959.

In 1912, one day after her seventeenth birthday, Virginia Christian died in the electric chair at the Richmond state penitentiary. She had been found guilty of murder. In her newspaper confession, she described a dream where a teacher walks into the courtroom and writes her defense on a blackboard. The only record of her education was three years’ attendance at P.S. 32, Whittier School, Hampton.