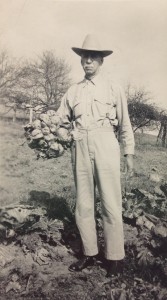 “Uncle George” Weddle, storyteller, who gave me my first book as a gift.

When I was six, Mother returned with my sister and me to the Blue Ridge Mountains of Virginia, to grow up among her people.

“Uncle George” Weddle looks in this photo just as I remember him. Erect. Solitary, since his wife and daughter were dead. Stern. Wearing clean khaki trousers and a clean, khaki long-sleeved shirt buttoned at the neck. Galluses. Broad-brimmed hat. Moustache. He holds a cool-weather vegetable I can’t identify.

Uncle George’s house had no electricity. In the kitchen was a wooden sink with a hand pump. When he lifted me to pump the handle, the water spilling from the spout seemed as miraculous as the Hoover Dam.

Sitting on his front porch, he told stories. About draft horses so stout they could buck a sawlog tall as a man. About chestnut mast so deep farmers loosed hogs in the woods to fatten them for butcher. About men so mean they could kill a blacksnake just by looking.

Uncle George saw the mountains the way he saw the Old Testament god. Sacred and jealous.

One visit Uncle George seemed agitated. Mother said he had been having trouble with the owner of a big tract of land bordering his small farm.

“I want to show you something,” he said. It was March. The sky was gray and the wind was raw. He took me by the hand. We walked up the steep ridge behind his house where he had a little peach orchard. The buds on the trees were beginning to color.

He held tight to my hand as I clambered after him over the rail fence into the orchard.

Scattered about were goat carcasses. They wore black coats, gray coats, white coats, spotted coats. Their bodies were the size of shepherd dogs.

“Told that son of a bitch they been girdling my trees,” he said. “Reckon he did a damn thing? So I fetched the twenty-two.”

One of the goats lifted its head and bleated feebly. I started for it.

“No,” Uncle George said, his grip hurting my fingers. “Don’t you touch a one of them creatures.” I was frightened. To this day I’m not sure what lesson he was teaching me, why he chose a boy to teach it.

But I knew I had a story.