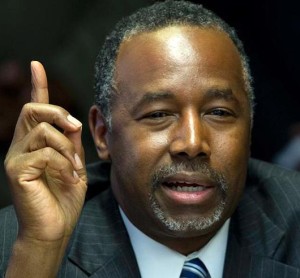 Republican primary candidate Ben Carson claims he doesn’t believe new voter identification laws passed in the South are racist, saying such restrictions are necessary. “Voting is an important thing,” he said. “Obviously, you want to make sure that it’s done by the appropriate people.”

Ah, the appropriate people. Who they are has always been a tricky matter.

Most historians agree that the Virginia constitutional convention of 1901-1902 had a single purpose—to disfranchise the African-American vote. Members of the legislature, in fact, were quite explicit.

In the Report of the Proceedings and Debates of the Constitutional Convention, State of Virginia, there is this exchange on the floor of the convention:

Mr. [E. Carter] Glass: “. . . the article of suffrage which the Convention will today adopt does not necessarily deprive a single white man of the ballot, but will inevitably cut from the existing electorate four-fifths of the negro voters. (Applause.) …

Mr. Pedigo: “Will it not be done by fraud and discrimination?”

Mr. Glass: “By fraud, no; by discrimination, yes…. Discrimination! Why, that is precisely what we propose; that, exactly, is what this Convention was elected for—to discriminate to the very extremity of permissible action under the limitations of the Federal Constitution, with a view to the elimination of every negro voter who can be gotten rid of, legally….”

Yet this voting reform “boomeranged on the reformers,” according to historian Wythe W. Holt, Jr. “It reduced the electorate by one-half….The new education, poll tax, and understanding requirements served to disfranchise more whites than Negroes.”

So an unforeseen consequence of the new Virginia constitution was that half the entire population lost the right to vote in 1902. Nearly all the whites who were disfranchised, of course, were poor and illiterate.

But Carter Glass was prescient in his prediction about “negro voters,” even if his estimate was high. Sixty percent of African-Americans in Virginia lost the right to vote.

So forgive us, Mr. Carson, if we’re a little dubious about your claim there is no racial motivation when voter identification laws are used to ensure only “the appropriate people” are able to vote.

Especially when the Alabama legislature passes a voter ID law, then closes 31 county offices where driver’s licenses—the form of ID most commonly used in voting—are issued.

Is anyone surprised the counties affected have preponderantly African-American populations?