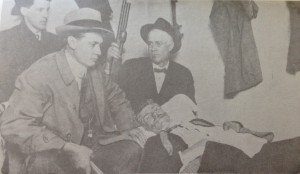 On March 14, 1912, four days before Virginia Christian murdered Ida Belote in Hampton, a stunning event took place far away in the mountains of Virginia.

At the Hillsville Courthouse, after a verdict in a case against Floyd Allen was returned, gunshots rang out. The sitting judge, Commonwealth’s attorney, and high sheriff lay dead. A juror lay wounded and would die two days later. A nineteen-year-old girl who was a witness for another case on the docket was struck by a bullet and would succumb to her wounds, as well.

Clerk of Court Dexter Goad, bleeding from several gunshot wounds, stood on the steps of the courthouse with an empty pistol in his hand. He had exchanged fire inside the courtroom and outside on the steps, as Floyd Allen and his kinsmen made their escape.

Badly wounded, Floyd Allen got only as far as a small hotel down the street from the courthouse. There he holed up.

This event was to be the subject of my first historical novel. The Allens were legend in my corner of Virginia.

Home from college one summer, I interviewed S. Floyd Landreth in his Galax National Bank office. At the time, Landreth was the last living court official who had witnessed the shoot-out. Serving as assistant Commonwealth’s attorney, he survived the melee by taking cover under a courtroom desk. Named special prosecutor in the later murder and conspiracy cases against the Allens, he would go on to be elected state senator.

As the smoke cleared, it was Landreth who rushed down the street to send a telegram to Governor William Hodges Mann. “Send troops to the County of Carroll at once,” he wrote. “Mob violence, the court. Commonwealth’s Attorney, Sheriff, some jurors and others shot on the conviction of Floyd Allen for a felony. Sheriff and Commonwealth’s Attorney dead, court serious. Look after this now.”

With law enforcement in Carroll County all but wiped out, Governor Mann telephoned the Baldwin-Felts Detective Agency in Roanoke, seventy miles from Hillsville. Riding a special overnight train, the agents completed their journey on horseback in a chilling March rain, arriving in Hillsville at daybreak.

The Baldwin-Felts men took Floyd Allen into custody. But the manhunt for his kin was just beginning.

Next week: how Floyd Allen led me to Virginia Christian.