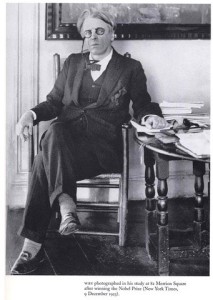 Poet William Butler Yeats after he received the Nobel Prize in Literature in 1923. He was the first Irishman to be given the award.

American politics has always had its share of bloviates, cynics, and demagogues, but recent years have provoked rhetorical excess not heard since Secession or the Red Scare.

The vapid arguments of some and the smug ignorance of others are especially troubling now. Too often positions are mortared with hate and intolerance.

I remember Massive Resistance and the closed schools in Prince Edward County, Virginia. I remember the Cuban Missile Crisis and scurrying under my desk for a nuclear blast drill. I remember the assassinations of John F. Kennedy, Malcolm X, Martin Luther King, Jr., and Robert Kennedy.

It was in Mrs. Meg Peterson’s English class at Floyd County High School that I discovered the work of the Irish poet, William Butler Yeats (1869-1935). The way Yeats used words for me was magical.

A Yeats poem written in 1919 in response to the carnage of World War I comes to mind as I listen to the likes of Cliven Bundy, Donald Trump, Mike Huckabee, and others today. How the message and the question resonate!

Turning and turning in the widening gyre

The falcon cannot hear the falconer;

Mere anarchy is loosed upon the world,

The blood-dimmed tide is loosed, and everywhere

The ceremony of innocence is drowned;

The best lack all conviction, while the worst

Are full of passionate intensity.

Surely some revelation is at hand;

Surely the Second Coming is at hand.

The Second Coming! Hardly are those words out

When a vast image out of Spiritus Mundi

Troubles my sight: a waste of desert sand;

A shape with lion body and the head of a man,

A gaze blank and pitiless as the sun,

Is moving its slow thighs, while all about it

The darkness drops again but now I know

That twenty centuries of stony sleep

Were vexed to nightmare by a rocking cradle,

And what rough beast, its hour come round at last,

Slouches towards Bethlehem to be born?

This version of the poem was published in 1921. Like any prophecy, its words are timeless. We must have hope. Our best must find conviction. Surely they will?